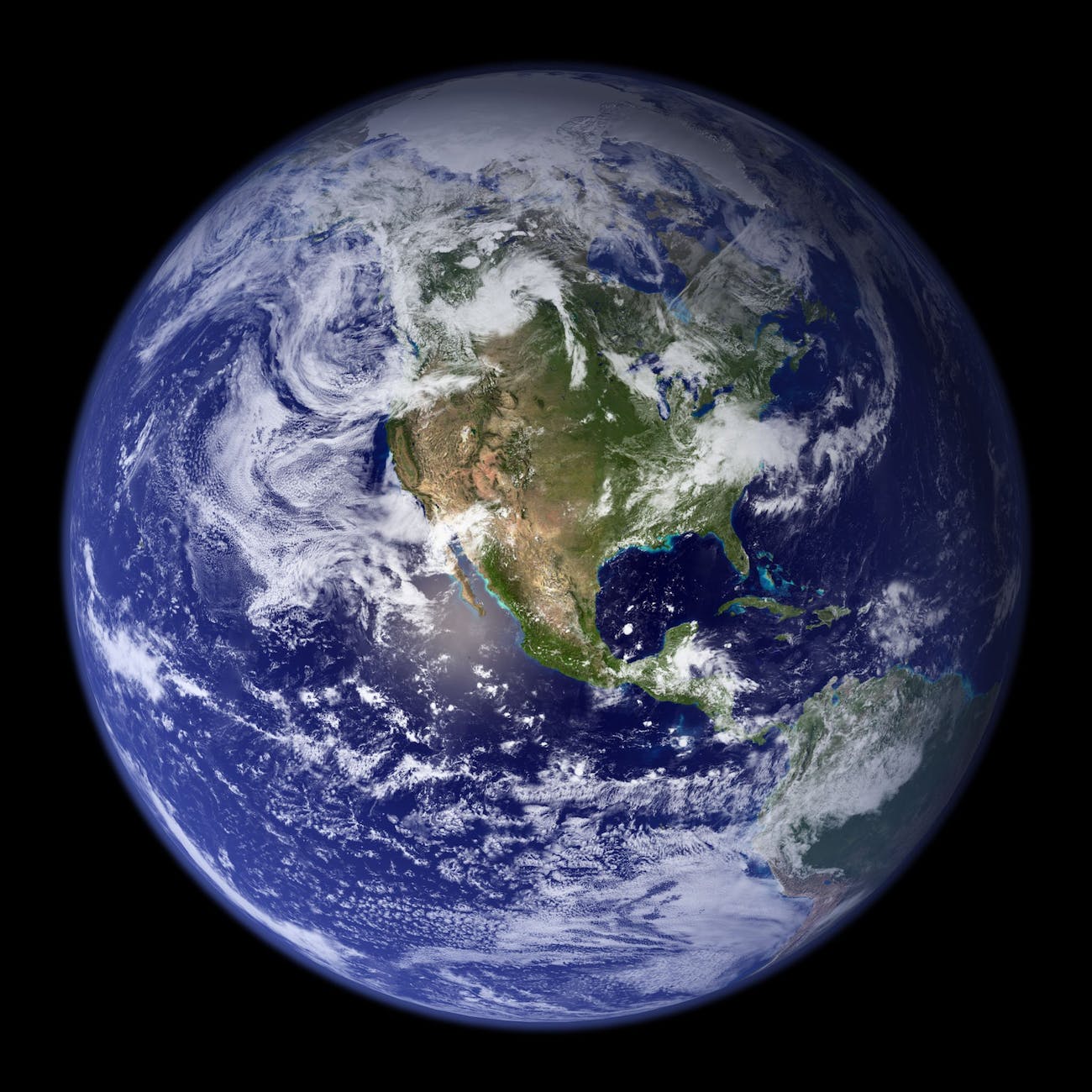 The Days of Creation

As we come to Genesis 1, envision yourself going to the very throne of God, the place where God speaks. He speaks, and a beautiful world comes into existence. He created the world in 6 days. From the moment God spoke on the first day, the world has never been the same since.

“In the beginning, God created the heavens and the earth.”

The first four days describe the creation of Heaven and Earth. In the last two days, God creates life to fill the earth.

The Earth is shapeless, an empty mass floating in dark space and water. God’s Spirit is hovering over the waters of the deep. I can envision Him looking down, ready to move at the speed of light, waiting for the Creator’s command. Then God said, “LET THERE BE LIGHT.” The Holy Spirit exploded through the waters and darkness that surrounded the earth.

The inventor of light brought a great blessing to the world. But God gave us His light, and one day the world will not need the sun and the moon because God will be its source of light. See Revelations 21:23.

God divided the light from the darkness. He called the light day and darkness night. The Holy Spirit flew through the entire world, splitting it in half. This imagery leads me to think about the equator, and how one side of the earth is dark while the other side is light. On the first day of Creation, one can already see the artistic flair of God’s Creation.

It is strange that He did not call the darkness good but still used it. He separates the good from the bad even today and still uses the good and the bad in our lives to produce good things. Many designers use dark and light colors to highlight their creations. I am amazed at how the Master Designer can take something that looks bad and transform it into something good.  As the mourning fades into the night the first day of Creation is complete. I find it fascinating that our day begins in the middle of the night. Yet, on the other side of the world, dawn is approaching.

On the first day, the Lord brought light into the waters and there was a contrast of light and dark colors.

Now on Day 2 He further separates light and darkness by creating the sky. He separated the waters above the sky from the waters below the sky. The King James Version calls it a firmament but later refers to it as heaven. Paul in the New Testament talks about going up into the third Heaven. That is the Heaven beyond the sky and outer space. See 2 Corinthians 12:2-4. That is one of the reasons we look up into the sky and think about God and Heaven. Of course, there is no way to know where the third Heaven is exactly.

As I look up into the sky, I also think about clouds. They are a fantastic site to behold and contain water as the Bible describes. I could spend hours imagining what God intended when he placed each one. I am also mesmerized by the amazing blue sky. It is Heaven on earth.

Day 3 Genesis 1:9-13: The Miraculous Parting And Moving of Waters

God spoke twice on the third day. First, He commanded the waters below the heavens to gather into one place, and dry land appeared. He called the dry land Earth, and the waters around the earth He called the Seas. These miracles of separating and gathering the waters in days 2-3 remind me of how God parted the Red Sea. See Exodus 14. Of course, these miracles far exceed that tremendous miracle.

Immediately after this, the Lord spoke a second time. And the earth brought forth grass, the herb-yielding seed, and fruit trees. The Creator was getting things ready for mankind long before man was ever created. The herbs that bore seeds as well as the fruit of trees would be food for man. As land was beginning to emerge, Creation was taking shape and God saw that it was good.

God saw the light he created in the world, but he also saw that the world needed a little more light. There is no mention of the world being a sphere. Yet the earth in its sphere-like shape was ready for the Lord to create and place the sun, moon, and stars. This may have included Pluto, Jupiter, and Mars. They are not mentioned here, but He definitely created these things.

Thank you, God, for such wonderful lights that fill the sky and brighten our world. Thank you for the Sun that rules the day, and the Moon that rules the night. Who doesn’t like to behold the sunrise and sunset? I also like to look at the stars at night when the sky is clear. These lights would serve as signs to mark sacred times, days, and years. The whole process of how the earth spins and revolves around the sun and the moon is amazing.

God filled the seas and skies with birds, sea creatures, and many other living things. He spoke life to them and blessed them to be fruitful, multiply, and fill the earth. I like to watch documentaries about birds and sea animals in the wild. It is fascinating to watch all the different animals God created. Sometimes birds even land in my yard. Another magnificent wonder to behold is the beautiful coral reef that hides just under the surface of the ocean.  The complexity of nature in the skies and oceans is an astounding miracle. I am awestruck at the grand design of Creation. But there is still more.

The Lord created the land animals and man and blessed them to fill the earth. He gave man and other creatures the ability to reproduce. But mankind, the apex of Creation, was created in the image of God Himself. The Lord put mankind in charge to rule and subdue the Earth and all living things. This was a great responsibility and blessing. Unfortunately, mankind would not be able to live up to God’s absolute perfection or follow God’s good plan completely. That is why God would send a Savior. We have already hinted at that promise of a future seed in the introduction and will discuss it more in-depth in Genesis 3. But for now, mankind was living in God’s Paradise and life was good. The Creator went the extra mile to ensure that every detail of His creation was good. And after creating man, the capstone of Creation, the world was very good.

These verses describe God resting on the seventh day, after the work of Creation. The concept of rest would become a very important part of the life of Israel or God’s people in the Old Testament.

The story of the Old Testament singles them out as God’s chosen people before Christ. The Lord told Moses in Exodus 20 that they were to do no work on the Sabbath or 7th day to honor God resting after Creation. The Lord blessed and sanctified this day as a day of rest and worship.

Of course, God wanted His people to have a weekly set time to remember and honor Him as their Creator. Having said that, Genesis 1 also reminds us of some other things about God and rest. On the first day of Creation, God established night and day, knowing we need to work during the day and sleep at night. He even designed our bodies to daily regenerate. Many doctors over the years have told their patients to go home and rest there is nothing else they can do. This is a huge blessing we do not normally take time to think about or praise the Lord for. We were after all fearfully and wonderfully made. See Psalms 139:14.

After resting on the seventh day, it does not take long for God to create Adam and put him in the Garden of Eden. I often wonder if there were two Creation accounts. Adam was clearly made after God created the world. It seems obvious, at least to me because of this prehistoric men and dinosaurs could have existed before Adam. My purpose is neither to defend nor reject these ideas. But they are a possibility based on the historical context and reading of the story. These questions are fascinating. However, I am not convinced the writer had them in mind when he wrote about Adam and Creation. The author wanted to focus on telling us a more important story about God, man, sin, and the nation of Israel. These historical and multifaceted purposes are first revealed in Genesis 2:4. Notice what it has to say. “These are the generations of the heavens and of the earth when they were created, in the day that the LORD God made the earth and the heavens.” KJV.

First, this verse takes us back in time to when God created Heaven and Earth in Genesis 1. This flashback gives us more details about mankind when they were created. We do not have a lot of information about the Creation of men and women in Genesis 1. They both were made in the image of God and created to rule and subdue the earth. In Genesis 2 the Lord formed Adam from the dust of the ground and placed him in a Garden. Eve of course would be created from Adam’s rib. We will talk later about how Adam learned some important things about his life and wife during this time. Thus, Genesis 2 adds some significant details about Creation, Adam, Eve, and our lives.

Second, the word “generations” is a key historical marker throughout Genesis. Here it references the Heavens and the Earth. Later in Genesis 5:1, it will refer to Adam. In 6:9 and 10:1 the term refers to Noah and his sons. Later in Genesis, it will be used to track Shem’s family, leading to Abraham and Jacob. See Genesis 11:27, 25:12, 25:19 36:1, 37:2. Each time it is used to mark segments of history related to the Lord’s people who would become the nation of Israel.

Thus, Genesis 1 starts with a story of God and Creation and ends with God resting on the seventh day.

But Genesis 2 continues the story with a history of God, Adam, and his descendants. It tracks the families of those who worship God from Adam through Jacob. He is significant because of his twelve sons who would become the nation of Israel. The rest of the Bible records the history of Israel that would, unknowingly to them, lead to Christ in the New Testament. In our next section, we will discuss Adam’s sudden creation and the things he saw and learned in the Garden of Eden.

I am currently writing a book called God Unusual Plan. It is a dramatic historic devotional study of Genesis 1-9. I hope you enjoy.

A Dramatic and Prophetic Short Story: Jesus and His Early Life by Jonathon Wright