God In The Background (Rev. 13) by John Stapleton 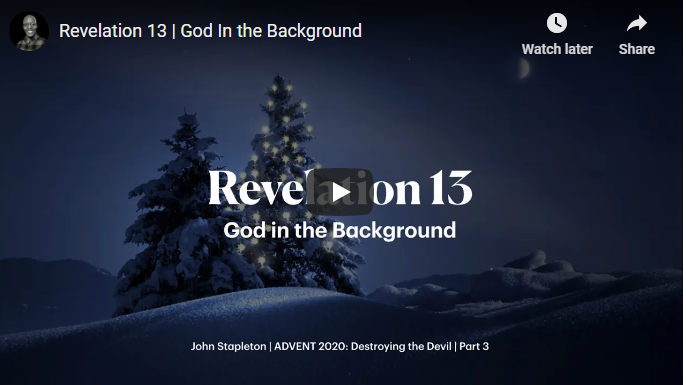 YouTuber John Stapleton shares Part 3 of his Advent series. He opens up and unpacks Revelation 13:11-18 and The Mark Of The Beast. Bringing up topics of government, history, false miracles and deceptions.

The first character that Revelation 13 introduces us to is the Sea Beast. This beast a an absolute parody of the Lion of Judah. It “was like a leopard… its mouth was like a lion’s mouth” (Rev 13:2).

It also mimics the Lamb in worship. The people, blinded by their zeal, ask, “Who is like the beast, and who can fight against it?” (Rev 13:4). This line of praise is stolen verbatim from the exodus story, after God rescued Israel from Egypt: “Who is like you, O Lord, among the gods? Who is like you, majestic in holiness, awesome in glorious deeds, doing wonders?” (Exodus 15:11).

Thirdly, it mocks the Lamb by the appearance of power: “To it the dragon gave his power and his throne and great authority” (Rev 13:2). Again, a similar verse appears earlier in Revelation in reference to the Lamb: “Worthy is the Lamb who was slain, to receive power and wealth and wisdom and might and honor and glory and blessing!” (Rev 5:12).

The next thing to notice is the blasphemy, the blatant disrespect, irreverence for God. In an intriguing cross-reference, Paul describes the man of lawlessness (also known as the antichrist) as one “who opposes and exalts himself against every so-called god or object of worship, so that he takes his seat in the temple of God, proclaiming himself to be God” (2 Thess 2:4). Perhaps the blasphemy of the beast is claiming that he himself is god. The point is, that this beast is extremely sacrilegious; the repetition of blasphemy demonstrates the point that this beast hates anyone and everything that is affiliated with God.

Church and state will never get along. As long as a government does not worship Jesus, we will have trouble. The devil hates God and he hates us; it is not lost on me that even though God placed government over us, these governments often serve Satan, as he uses them to beat up and harass God’s Church. This historically leads to many Christians dying for their faith (like the story we find in Daniel 3).

This “is a call for the endurance and faith of the saints” (Rev 13:10). Faith is confident assurance that God rules and has victory and power over Satan. The idea behind endurance is courageously bearing up under suffering. The point is, death is how we conquer. Dying in faith is actually a victory!

The first beast represents godless governments. The second beast here represents the false prophet. Read this passage and you’ll see that he is quite the evangelist for Satan.

Satan mimics everything God does. It looks like he is winning because of all the evil and because we don’t see God.

I challenge you to consider all the times the text today said that the beast was allowed to something. He was allowed to deceive, allowed to kill the saints, allowed to be powerful – allowed. Nothing, not even the most primal evil, happens apart from God’s permission. God is the only one with true and enduring power!

Check Out More By John Stapleton

The Ministry Of The Unveiled Face by Janet Fichter

Princess Tiara And The Crown Of Virtues by Janet Fichter