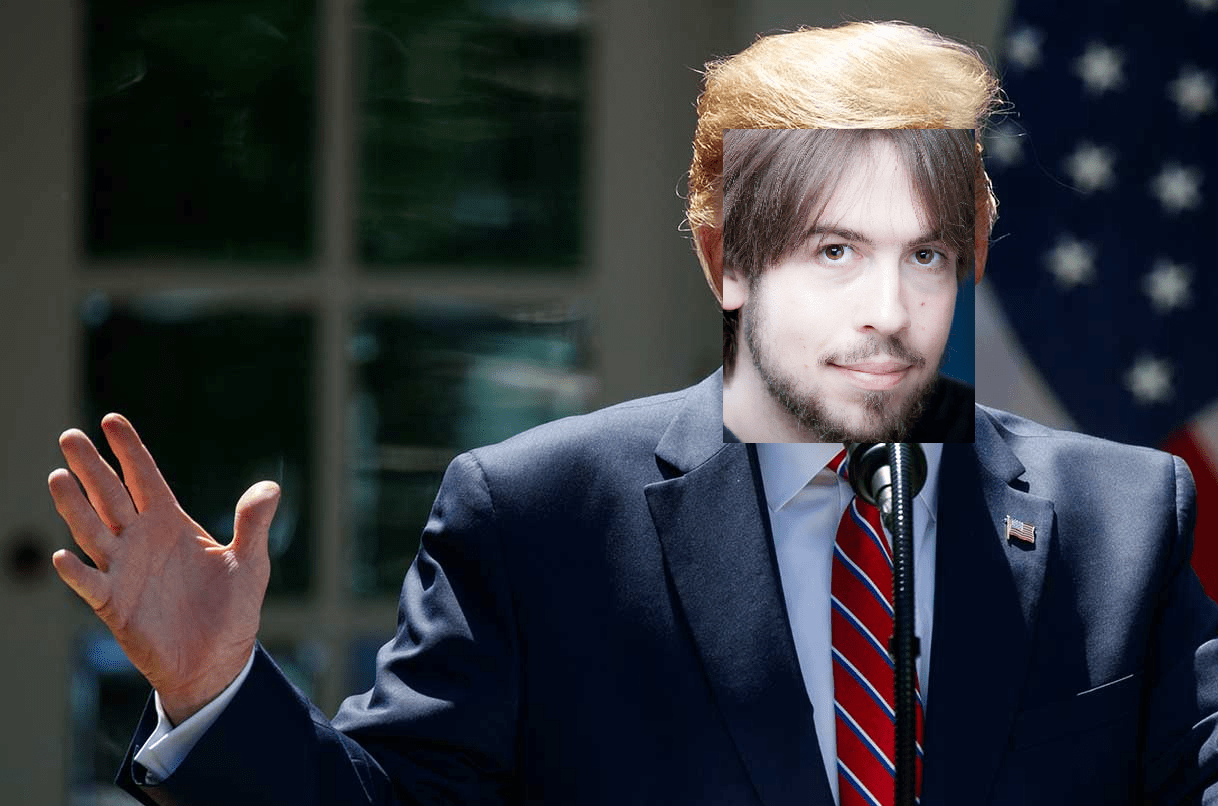 You heard that correct people. I, Michael Furlonger, am running for the presidency of….

Ok. All seriousness now. We all know that I photoshopped (a big word for copy & paste) my face over top of Donald Trump’s face. We know this by the hair and hand gestures.

I Could Be King

(I actually have a whole video topic on sin and redemption found in Jesus Christ under this title, but I’ll save it for later.)

“When (Israel elders) said, ‘Give us a king to lead us,’ this displeased Samuel; so he prayed to the Lord.  7 And the Lord told him: ‘Listen to all that the people are saying to you; it is not you they have rejected, but they have rejected me as their king.'” (1 Samuel 8:6-7)

A little bit of a back story of what’s going on in the verses above:

God has rescued the Israel people out of the land of slavery in Egypt. Bringing the false gods of Egypt and the other nations to shame. God leads the people into a new land and He overthrows these people who live in the land and calls it the Land of Israel.

Israel, at this time, has no king or formal government. You read about this in the book of Judges: After Israel takes land, they serve pagan gods and end up enslaved to these people. They cry out to Yahweh, the God who rescued them and brought them to the land, and God sends a “judge”. Again and again this is happening. You can almost set your watches to it.

So they go through all of these judges who ruled over them for a time. Once the judge died, they’d serve the gods of the Canaanites, then “Spit hits the fan”, they call to God, God lifts up another judge to overtake the Canaanites, and then rules for a time. Again and again.

There’s a lot of reading that you, especially as Christians, should be reading in this text. Conservative, Republican, Liberal, Democrat- I don’t care.

The only reason I picked Donald Trump was because his hair and hand gesture is recognized. Joe Biden’s head doesn’t have as much of a recognizable characteristics.

Next to Judges in the Bible is Ruth, which happened during the time of Judges, and then 1 Samuel. This brings us full circle back to the beginning of this blog: The people are calling out, “Give us a king” and God saying, “I’m the one they’ve rejected.”

And The Lord Said…

“Now listen to them; but warn them solemnly and let them know what the king who will reign over them will claim as his rights.” (1 Samuel 8:9)

Samuel gives the people a long list of things that will happen to them under another’s leadership. Read 1 Samuel 8:11-17 for further details regarding the taxation, enslavement and taking of good from the people.

“When that day comes, you will cry out for relief from the king you have chosen, but the Lord will not answer you in that day.”
But the people refused to listen to Samuel. “No!” they said. “We want a king over us. Then we will be like all the other nations, with a king to lead us and to go out before us and fight our battles.” (1 Samuel 8:18-20)

I encourage you all to read your Bibles. We are going through a very similar state as the Israelites even though it’s 2021. We are doing “as we see fit” then calling out for new leadership. And that will be great until the novelty wears off and we go to the election polls in four years. Just like in the book of Judges, we keep getting “rescued” but then we turn away from that to serve our own ways.

So God answers the Israelites call for leadership and gives them King Saul. Saul is good for a while until he turns away (just like the people in Judges), then God lifts up David. Then, because of David’s sin, and the actions of his son, Solomon, Israel is split.

And don’t think this is an attack from either side of the political aisle.

“The Lord has sought out a man after his own heart”

“The Lord has sought out a man after his own heart and appointed him ruler of his people, because you have not kept the Lord’s command.” (1 Samuel 13:14)

Regardless of who our “king” (democratically appointed leader) is, God is looking for a man or woman after his own heart.

Please, don’t be deceived in thinking, “Because I go to church, I am after God’s heart.” The devil doesn’t waste time at strip clubs and bars, he’s coming for the church.

Let us call on the Holy Spirit, truly, and weep over our sins.