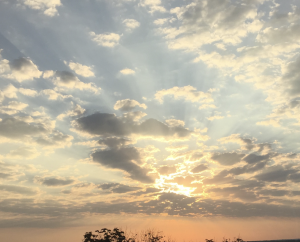 “Blessed is the King, full of grace, glory in the highest!”

The very stones would cry out if the people were silent

Tears raining down His face for all Jerusalem

Driving out unrighteousness from the holy temple

The Living Word then returns to preach the gospel

Authority over all, the rejected cornerstone

This prophetic journey must be finished all alone

Pharisees conspiring together, wishing He were dead

Judas at Satan’s bidding, betrayal in his heart

Sin is a chasm, growing deeper from the start

God’s only Son prays in earnest, disciples sleeping, in Gethsemane

“Remove this cup from me”, but “Your will be done”, His final plea

Armed temple guards arrest Him after the traitor’s kiss

His closest friends scatter, who could have foreseen this

Condemned before the high priest, then before Pilate He goes

Peter in the shadows denies Him times three, the rooster crows

Prince of peace, mocked and beaten, before Herod then Pilate again

But he can find in Him no wrong, he washes his hands of Him

His spotless life traded for Barabbas, a murderer and a thief

“Crucify Him”shouts the crowd at the urging of the priests

A purple robe and cruel crown of thorns He wore

A heavy wooden cross, laden with all our sins, He bore

Now hanging from that tree, nails piercing His hands and feet

God’s only Son, suffered and died for you and for me

His tortured body then placed in a borrowed tomb

His disciples still afraid, hiding in a darkened room

But on that third day, something exceedingly extraordinary!

An empty grave, the stone rolled away, discovered first by Mary

Death is finally defeated, repent and your sins are forever forgiven

The angel declaring “You seek Jesus of Nazareth, who was crucified.

“And he said to them, “Do not be alarmed. You seek Jesus of Nazareth, who was crucified. He has risen; he is not here. See the place where they laid him.”