Book Review: They Call Me Gomer by JC Miller 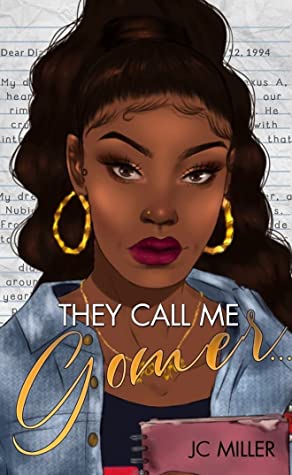 “Dear Diary, On September 3, 1982, two things happened that I’ll never forget: I acquired an older sister, and I fell in real love. But tell me, what does an eight-year-old know about love?”

For nearly a decade, Hosea Felix and Gomer Williams were inseparable. She loved him from the moment she laid eyes on him. Their friendship was iron-clad until temptation rocked Gomer to her core. Somewhere along the way, she fell for another guy and traded young love for instant pleasure. Not only is Jeri Cole fine—he is a bonafide gangsta, unattainable, and off-limits. Jeri was all Gomer could think about, and the only thing she thought she wanted. Despite her big sister already laying claim to him, not much could stop Gomer from clawing at the possibility of love and diva status. Getting with Jeri felt right…but at what cost?

Gomer never backed down. She is the original bad girl—ratchet, bougie, and insatiable. Feel like you wanna dislike her? Well, get in line.

They Call me Gomer… JC Miller’s sophomore spin-off novel enthralls readers with a deeply woven, emotionally heart-tugging take on the Book of Hosea. By examining rape culture, drug addiction, family secrets, and the vulnerabilities of young Black girls in pursuit of fortune and fame, this contemporary tale gives those in search of a good dra-mance all the feelings!

They Call Me Gomer is a modern retelling of the story set forth in the book of Hosea in the Bible. Hosea, a prophet of God, marries a prostitute at the Lord’s direction, and his marriage to her mirrors Israel’s relationship with God.

The story is told from Gomer’s point of view. Go-Go, as she is called by those close to her, seems destined for a life of trouble from the get-go. Her family life has its issues, and even at a young age, she yearns for the streets – dangerous men, loose women, drugs aplenty, and the promise of the luxe life.

Hosea Felix, or Zee, as she calls him, is different. He is a young man with a strong faith, and he is drawn to Go-Go in spite of her fast ways. Go-Go longs for him, too, but she keeps chasing what she sees as the life she really wants. Even after she and Zee are married, home and family isn’t enough to hold her, and she keeps doing the things she wants but knows she shouldn’t do. She can’t even be sure Zee would want her back after the things she’s done.

The author does a good job of drawing the reader into Go-Go’s world. Go-Go doesn’t necessarily WANT to do bad things. She just can’t STOP herself. Just like Gomer in Scripture, she dashes after men who are nothing but bad for her and flouts her marriage vows repeatedly. The man she really thinks she wants is her sister Rah’s husband, Jeri, and Jeri is rotten to the core. He may do nice things for Gomer and her family, but he has his own agenda. Gomer may have to learn that the hard way.

Like the book of Hosea, this is a story of rebellion and redemption. Go-Go is a character you alternately want to shake and to hug. Her actions are driven by the hurt, broken little girl hiding deep inside, and she just doesn’t know how to change, even when she realizes that she should, even when she wants to. Zee’s love doesn’t fail, though. He remains faithful, even when Gomer is faithless. When she returns, he loves her enough to set boundaries and expect her to abide by them.

I love how the author weaves Scripture into her story. It’s a part of the narrative, not a thump over the head. This book really was a joy for me to read, and once I got into it, it was tough for me to put down. I love retellings of Scripture, and this one does not disappoint. Hopefully you’ll read it and be inspired to open the Bible and read the story of the real Hosea and Gomer.

Disclaimer: I received an advance review copy of this book from NetGalley and Jess, Mo’Books, LLC. All opinions here are mine, and I don’t say nice things about books I don’t actually like.

Check Out More From Lisa Henson

By My Own Betrayal by Cydnie Trenholm

One thought on “Book Review: They Call Me Gomer by JC Miller”