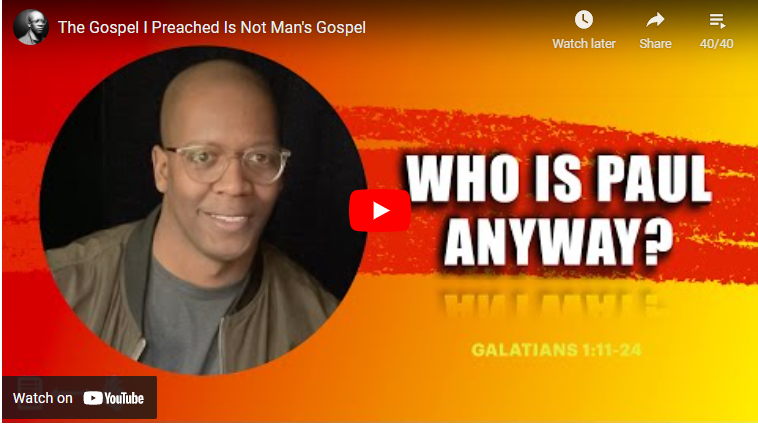 Read your passage several times in your preferred Bible version. As you read, use the Highlighting Tool to mark any words or ideas that draw your attention. You could highlight things you want to look up later or key phrases or sentences that seem important for the theme or main idea of the passage.

Galatians 1:11–15 (ESV) — 11 For I would have you know, brothers,
that the gospel that was preached by me is not man’s gospel. 12 For I
did not receive it from any man, nor was I taught it, but I received it
through a revelation of Jesus Christ. 13 For you have heard of my
former life in Judaism, how I persecuted the church of God violently
and tried to destroy it. 14 And I was advancing in Judaism beyond
many of my own age among my people, so extremely zealous was I for
the traditions of my fathers. 15 But when he who had set me apart
before I was born, and who called me by his grace, 16 was pleased to reveal his Son to[e] me, in order that I might preach him among the Gentiles, I did not immediately consult with anyone;[f] 17 nor did I go up to Jerusalem to those who were apostles before me, but I went away into Arabia, and returned again to Damascus.

18 Then after three years I went up to Jerusalem to visit Cephas and remained with him fifteen days.
19 But I saw none of the other apostles except James the Lord’s brother.
20 (In what I am writing to you, before God, I do not lie!) 21 Then I went into the regions of Syria
and Cilicia. 22 And I was still unknown in person to the churches of Judea that are in Christ.
23 They only were hearing it said, “He who used to persecute us is now preaching the faith he once tried to destroy.” 24 And they glorified God because of me.

What questions or insights do you have about this passage?

Take note of anything in the text that is confusing, surprising, challenging, or hard to understand. Record your questions here and keep them in
mind as you explore your passage further.

The opening comment of verse 11 is connected to Paul being a servant.

Is there a separation between the tradition of the fathers and devotion to God? Or is it the same?

2. Read the Passage in Other Translations

Reading your passage in more than one translation can improve your understanding of the passage. Differences in translations may indicate places where the interpretation of the text is debated, or the differences may reflect different approaches to translation (like sticking close to the wording of the original versus adapting the wording to make it sound natural in the language of translation).

3. Identify People in Your Passage

Most passages include references to people and other intelligent living beings. Here we want to identify the people mentioned in the passage and explore the roles they play. You can understand your passage better if you make note of all the people involved including individuals and groups and their roles in events.

Who are the main players in your passage? What makes them important to the passage?

Jesus, who revealed himself to Peter and Commissioned him.

Paul, who was called by Jesus and commissioned as an apostle.

The churches in Galatia, who are Paul’s audience.

The churches in Judea, who rejoiced that Paul was saved, though they haven’t met him yet (1:23).

Peter, who Paul visited, and who confirmed Paul’s call to the Gentiles.

James (who Paul only saw, but perhaps didn’t converse with).

Examine relationships between your passage and other passages in the Bible. Letting Scripture interpret Scripture has been a guiding principle of biblical interpretation for centuries. The idea is that the meaning of an obscure passage might be clarified by other passages where the meaning is more straightforward.

Acts 9:1-6 | But Saul, still breathing threats and murder against
the disciples of the Lord, went to the high priest 2 and asked him
for letters to the synagogues at Damascus, so that if he found any
belonging to the Way, men or women, he might bring them
bound to Jerusalem. 3 Now as he went on his way, he
approached Damascus, and suddenly a light from heaven shone
around him. 4 And falling to the ground, he heard a voice saying
to him, “Saul, Saul, why are you persecuting me?” 5 And he said,
“Who are you, Lord?” And he said, “I am Jesus, whom you are
persecuting. 6 But rise and enter the city, and you will be told
what you are to do.” … 15 But the Lord said to him, “Go, for he
is a chosen instrument of mine to carry my name before the
Gentiles and kings and the children of Israel.

Which cross-references are most important for your passage? What additional insight do the related passages provide for your understanding of your passage?

Review what you have studied and summarize it. Writing a brief summary of your passage and what you’ve learned about it will strengthen your understanding of the passage and help you remember the main points from your study.

In a brief paragraph, summarize the passage and the main points you have learned about it from your study.

Paul’s life can be summarized into 2 halves: before and after Christ. Before Christ, he was a dangerously religious man. After Christ, he became dedicated to being Christ’s herald to the Gentiles, with as much (possibly more) passion as he had when he persecuted the church.

Look at Bible commentaries to see how others have interpreted your passage. Review the commentary’s discussion to find out which parts of your passage are most challenging or unclear. A commentary discussion may alert you that something you thought was clear in the text is actually a complicated and debated issue.

Who would have guessed that God would choose the great enemy and persecutor of the early church, himself a zealous nationalist for his own people, to become one of the early church’s most effective preachers of the gospel to all types of people (Eph. 3:7–10)? Paul’s conversion forms an important leitmotif through much of the NT precisely because it is so surprising and such a clear demonstration of God’s power to change even the worst sinners into his faithful servants (Acts 8:3; 9:1–29; 22:3–21; 26:9–20; 1 Cor. 15:9; Eph. 3:8; 1 Tim. 1:12–13). We should never assume that anyone is beyond the reach of God’s grace, and we should humbly welcome everyone whom his grace reaches and brings into the full fellowship of his people.

It was precisely Paul’s law-free mission to the Gentiles that brought him into conflict with the Judaizing teachers in Galatia.

The earliest uses of “Judaism” are used in contexts that describe militant defense of the Jewish religion (a few references are in the book of Maccabees).

Have the consulted commentaries modified your understanding of the passage? In what way?

Is there a separation between the tradition of the fathers and devotion to God? Or is it the same? Though Paul would’ve considered himself devoted to God, he wasn’t, for he tried to destroy the church.

Why is Syria and Cilicia mentioned? (1:20) Paul was born, raised, and educated in Cilicia. After visiting Peter, Paul went back to his hometown to preach (1:21).

Acts 22:3 | I am a Jew, born in Tarsus in Cilicia, but brought up in
this city, educated at the feet of Gamaliel according to the strict
manner of the law of our fathers, being zealous for God as all of
you are this day.

[Paul didn’t want] any man to teach him the Gospel.

Paul probably wanted to understand the gospel for himself first, before being influenced by apostles who still heavily favor the law of Moses.

An important part of Bible study is determining what timeless principles are taught in a passage so that you can apply those principles in your own life. The meaning of a passage will be applied differently at different times and in different places, but the underlying truths of Scripture will be applicable in some way at all times and places. Before we can apply a passage, we must understand its theological principles.

What theological principles are communicated in your passage?

Which theological principles from your passage are most important? How might they be applied today?

Paul is serious about grace because that is what changed him. Religion did nothing for him.

Philippians 3:2-9 | Look out for the dogs, look out for the evildoers,
look out for those who mutilate the flesh. 3 For we are the
circumcision, who worship by the Spirit of God and glory in
Christ Jesus and put no confidence in the flesh— 4 though I
myself have reason for confidence in the flesh also. If anyone
else thinks he has reason for confidence in the flesh, I have
more: 5 circumcised on the eighth day, of the people of Israel, of
the tribe of Benjamin, a Hebrew of Hebrews; as to the law, a
Pharisee; 6 as to zeal, a persecutor of the church; as to
righteousness under the law, blameless. 7 But whatever gain I
had, I counted as loss for the sake of Christ. 8 Indeed, I count
everything as loss because of the surpassing worth of knowing
Christ Jesus my Lord. For his sake I have suffered the loss of all
things and count them as rubbish, in order that I may gain
Christ 9 and be found in him, not having a righteousness of my
own that comes from the law, but that which comes through
faith in Christ, the righteousness from God that depends on faith…

8. Apply the Passage’s Principles to Yourself

Consider how to apply the theological principles you identified in this passage to your own life.

How has this passage challenged or moved you?

Am I growing more religious or more loving?

What issues, personal or corporate, are involved with this passage?

What spiritual struggles are addressed in this passage, either directly or indirectly?

What response do you think the passage should inspire in others if you shared it and your insights with them?

Consider when your conversion.

What have you learned that you should share with others? Your insight could be valuable to others; sharing about it may encourage and enlighten your friends.

Use Faithlife Groups, social media sites, email, or conversations to share your insights and start discussions with others.

Don’t forget to include what steps you might plan to take in response to what you’ve learned. The ultimate goal of our learning and study of the Scriptures should be a changed life, not merely acquiring more information.